How did Israel and Saudi Arabia survive one of the driest periods in the last 1000 years?

The Levant region along the Eastern Mediterranean, just north of the Arabian desert, is no stranger to drought and water resource shortages. Summers are typically dry with minimal rainfall and rainy seasons only bring three to four days of rain at a time alternating with dry spells lasting from four to fifteen days.

Over the last 50 years, the climate has become even dryer with precipitation decreasing and aridity increasing, putting a strain on drinking water resources and agricultural activities. In 2014, NASA identified the years of 1998-2002 as one of the driest periods in the Mediterranean over the last millennium, adding more pressure to the challenges already facing the Middle East.

Israel, situated in a sensitive climatic position, transitions from the sub-humid Mediterranean climate in the North-West to the arid climates of the Judean, Negev, and Arava deserts located along the Eastern and Southern borders. Yet, despite its location in the drylands, residents use domestic water at a rate of approximately 260 litres per capita per day, while total freshwater withdrawals average 260% of the internal resources available annually. Just a little further South-East of Israel is Saudi Arabia, which spans almost the entire Arabian desert and manages to supply domestic water to its residents to the tune of 265 liters per capita per day, and withdraws a staggering 900% of its total internal freshwater annually.

So, where does Israel and Saudi Arabia get their water?

While withdrawal from non-renewable aquifers also bumps up these rates, desalination is one of the most significant contributors to domestic water resources in both Israel and Saudi Arabia, supplying over 50% of the domestic water in both countries with roughly 600 million cubic meters in Israel and over 1 billion cubic meters annually in Saudi Arabia. 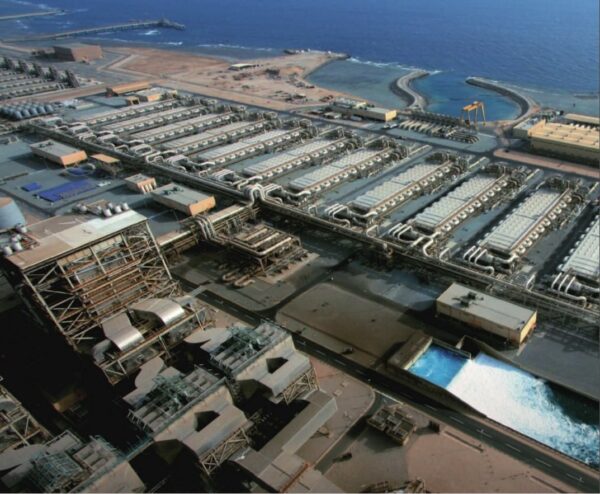 How does desalination work?

In desalination processes, seawater or brackish water flows through screens that remove debris and seaweed while subsequent coagulation and flocculation treatment processes remove larger solids before water is forced through membrane filtration units – typically reverse osmosis (RO) or nanofiltration (NF). These semi-permeable membranes remove salt and other large molecules, allowing only clean water to pass through.

Due to the high influx of microorganisms in the seawater and the build-up of nutrients on the membranes, biofouling is one of the biggest challenges desalination plants face. Microbes proliferate on membrane surfaces, blocking pores and increasing the energy required to pump water through. This leads to significant energy demands and frequent chemical treatments which are harsh on membranes and can reduce their lifespan.

The Sorek desalination plant, located in Tel-Aviv, Israel, with biofouling expert Edo Bar-Zeev, developed an innovative, chemical-free approach to mitigate against biofouling. The seawater is passed through porous lava stone which functions somewhat like a wastewater trickling filter or biologically active filter, giving the microbes somewhere to settle before reaching the RO unit and protecting the membranes. For a plant like Sorek, with roughly 50,000 membranes, this makes a significant difference in energy demands and cleaning cycle frequency.

Researchers are also working to reduce the amount of fouling on membranes by adjusting the materials used and the surface properties of the membranes; smoother surfaces and more hydrophilic membranes can provide a barrier to adhesion while a low surface energy can ensure foulants are easily washed away.

As the planet faces more and more significant water shortages, solutions like these can help make desalination a more feasible and sustainable option to help meet the growing demand for safe domestic water. LuminUltra’s rapid microbiological monitoring technology can also help in the quest to manage microorganisms by providing users the ability to measure the total biological population in less than 5 minutes. See how it can be used to calculate a membrane “fouling index” to help operators manage and optimize process efficiency in this Application Note.

For more information on desalination, here are the “Top 10 questions about desalination” answered by Lauren Williams at the Orange County Register.

Ashlee has a biology degree and is a recent graduate of the Masters in Chemical Engineering program. After many years of study, it’s no surprise that she is adept at simplifying complicated subject matter, and as a result is our go-to-gal for delivering webinars, product demos and training. Ashlee enjoys travelling which is a good thing in her current role at LuminUltra – having already visited 25 states. When she’s not trekking through a National Park, she can be found near the water; canoeing, kayaking or fishing.

Imagine trying to solve a problem when you are provided just 1% of the total data. This is essentially the case in analyzing water and wastewater microbiomes. Conventional microbiological testing methods such as culture and microscopy can identify only about 1% of microorganisms that are contained in a typical environmental sample. The remaining 99%… Read More

What is Legionella, and How to Prevent Legionella Contamination

It’s a hot topic when Legionella contamination turns up in apartment buildings, seniors’ homes and other facilities. But what is legionella? And does it really present a risk?   What is Legionella? Legionella is a form of bacteria that grows in water and can lead to Legionnaires’ disease (also known as legionellosis) –… Read More

It’s All in How You Look at Things.

We’ve all seen, or at least heard of, the 100-year-old optical illusion of the duck/rabbit photo. The premise is simple, different people see a duck first, some see a rabbit, while still others can see both.   This proves that everybody views the world a little differently, in everything from philosophy to everyday objects. What… Read More