MIC affects diverse industries including marine transportation and shipping, chemical and oil processing, power generation, water treatment, and aviation, among others. MIC results from cooperative metabolism between the microorganisms and metal surfaces that accelerate the corrosion processes. In short, specific microorganisms found naturally in the environment can ‘turbo-charge’ the corrosion of equipment and infrastructure if steps are not taken to mitigate their effects.

MIC is highly destructive. There are thousands of people around the world whose sole job function is to try to treat and prevent it. Entire research programs have been built around trying to understand it. But when we’re attending a networking event or a dinner party, we find that most people aren’t familiar with it and we are often asked for some specific examples.

Here are two examples that everyone can relate to regardless of their occupation.

Do you remember the news reports about the large oil spill in Prudhoe Bay that occurred back in 2006? On March 2nd, 2006, it was discovered that a BP-owned transit line supplying the trans-Alaska pipeline was leaking. Everything told, more than 200,000 gallons of oil leaked into the bay – the largest spill in the history of Prudhoe Bay. What happened to cause this leak? An investigation indicated that it was MIC. Sulfate-reducing bacteria (SRB) were involved in creating a one-quarter-inch hole in the bottom of the transit pipe. This went unnoticed for some time as the pipe was buried underground. Events like this and others have led the oil industry to become one of the leaders in the field of researching and mitigating MIC. We have partnered with a respected player in the oil industry to develop solutions that allow for earlier and more accurate detection of the microorganisms involved in MIC through molecular analysis.

Flying is a part of our everyday lives and MIC is a problem in the aviation industry, too. An article that appeared in Popular Science discussed the new battle that the Air Force is waging to fight MIC. Materials specialists at the Air Force Research Laboratory (AFRL) have come to realize that microorganisms are corroding aircraft surfaces much more seriously than they had previously thought. The Air Force is now spending up to $1.2 billion annually on MIC. “Microorganisms can eat away at surface materials, and some of the worst areas affected are tight, hard-to-reach areas that maintainers have difficulty disinfecting,” said AFRL Biological Materials and Processing team leader Wendy Goodson. The problem is so severe that they are now considering regularly “cooking” F-16s at temperatures up to 180°C to kill off bacteria in hard to reach areas.

These are two significant examples but MIC is happening all around us. It could even be happening in your home and/or office as you are reading this article. Look up above you – is there a sprinkler system? Did you know that MIC is a big problem in sprinkler systems, too? Anywhere that metal and water come into contact are potentially at risk if the conditions are right.

Learn more on LuminUltra’s GeneCount series and how we can identify the microorganisms present in your system enabling you to effectively prevent and treat microbial issues before they cause costly problems.

From the editor: This guest post was originally published on InstantLab’s blog.

Case Study on Some of the Major Corrosion Catastrophes in History.

How the Air Force Will Attack Its Tiniest Enemy: Plane-Corroding Bacteria 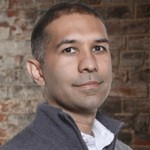 Neil Sharma is a molecular biologist and technology enthusiast. His passion is developing new and innovative products that solve important problems. He has a Ph.D. from Rice University and currently lives in Gaithersburg, Maryland.

Metagenomics is an emerging field.  Metagenomics is a quickly evolving field, with new papers being published and new products and services being offered each year. Since metagenomics analysis is a relatively new field in microbiology, standard procedures are still being worked on from different researchers and companies. If results are to be comparable between different research institutions and companies, it… Read More

Pink, orange, red, brown and grey – paper mill slimes can come in an endless range of colours.  What contributes to these variances in colour? Microorganisms.  Different species – which live within a slime – produce different hues.  Unfortunately, you won’t find gold at the end of that rainbow.  In fact, it’s quite the… Read More

The Story of Your Data