Many innovations are inspired by nature – LuminUltra’s technology is no different. Find out how we use the same chemical found in a small firefly to prevent big problems for water utilities.

Fredericton’s LuminUltra Technologies Ltd. saw a gap in wastewater treatment testing and filled it by co-opting the ‍firefly‍’‍s glow.

Living things use a molecule called adenosine triphosphate – ATP – to store energy. It’s energy“cash” the organism can spend on whatever activity it needs to do.

For a ‍firefly, bursts of light – a phenomenon called“bioluminescence”– are the best way to spend at least a portion of the ATP it generates and stores from the energy it gets from its food. The winged beetle’s blinking back end, which works to ward off predators and attract mates, requires a finely tuned chemical system.

That chemical system is what LuminUltra has put to work.

From tail to test tube

Jeremy Duguay is a senior account manager with LuminUltra. He’s primarily on the company’s sales and support side, but with a Ph.D. from Queen’s in Kingston, Ont., he’s well-placed to explain how the science works.

“It’s the same thing as a ‍firefly tail. You see it light up at night – that is the ATP molecule reacting with the luciferase enzyme and the luciferin substrate,” says Duguay.

The molecules take their titles from Lucifer, whose name means“bringer of light,” or “morning star.” But for LuminUltra, it’s less about fallen angels and more about finding microscopic bugs in the water.

“We’ve taken that reaction out of the ‍firefly tail, put it into a test tube, essentially,”says Duguay.“Once you have the ATP extracted from your sample, you mix it with some very specific chemistries, with the luciferin and luciferase in there, then quantify the light in the luminometer – that’s the piece of equipment that we also manufacture. Once you have the amount of light, it’s directly proportional readout of how much biological activity there is in a sample.”

It’s a relatively simple formula: Living cells use ATP, and if you can measure it – in this case by using a luminometer to measure the light produced by the luciferase reaction, which relies on ATP – you can correlate the brightness of your test tube to the number of living microbes in your sample.

Unlike Lucifer, microbes are neither good nor bad by nature. For humans, however, the microbiological activity can be anywhere from essential to devastatingly harmful.

LuminUltra, which officially launched in 2003 and now employs about 30, first targeted customers who were looking to understand one essential role of microbes: wastewater cleanup crews. By measuring how much ATP you have in your water, you can find out whether the bugs are healthy.

“It all started with the first test, and the concept the company was designed for: monitoring the biomass in biological wastewater treatment,” says Duguay. “That is a process that takes micro-organisms, utilizes them to break down waste and produces clean water on the back end of the plant.

“The biomass is the most important part – the driving engine of that process. Yet there were very few tools people had available in that application to actually monitor and see what the biomass was doing. That void in the marketplace is what set about LuminUltra’s first technology to monitor and quantify that.”

The company quickly realized that measuring ATP in water samples had applications beyond wastewater treatment – in the areas where microbes weren’t so welcome. The concept of an ATP test isn’t new, but LuminUltra has tuned it for specific applications.

In a process such as distributing clean drinking water to a city, the microbes are the enemy. And to effectively combat the enemy, you need to act fast.

“The tools that were available to monitor micro-organisms in those applications were traditional tools: things like a microscope and culture-based tests, which are gold standards and very good at what they do, they just take a fair bit of time and expertise.

“Particularly the time point is a big issue if you’re taking samples from a drinking water system and testing them for micro-organisms, and it takes two days or more to get results back. During that time, you could still have a problem there, but you don’t know about it until the results come back.”

What the test kits lose in terms of identifying the specific type of micro-organism in a sample, they gain in speed and portability. Duguay says the kits fit in a briefcase and give results in anywhere from three to seven minutes. He calls LuminUltra’s kits a “first line of defense.”

Customers could include drinking water treatment plants and manufacturing interests – both spots where microbes can foul the final product. squishing ‍fireflies Micro-organisms may be everywhere, and the ATP they create, spend, and recreate may also be ubiquitous, but what about the luciferase and luciferin – does every test require the squishing of five or 10 light-bringing beetles? “They did have to have graduate students or poor undergrads going out, collecting and actually harvesting the enzyme from the ‍fireflies at the time, and purifying it,” says Duguay.

Recombinant technology is a way of splicing DNA segments and using microbiological “factories” to mass-produce the desired substance. Duguay can honestly tell a customer that no ‍fireflies were harmed in the making of this test kit. The kit, in fact, has the potential to prevent harm in the human context.

“Go to a city like New York or Boston – there’s a lot of pipes under the city. The water gets treated, gets pushed out under the city for people to drink. A lot can happen between the time it leaves the treatment plant and the time it comes to your tap. Being able to actually go out in the field, and test different locations, for water quality, very rapidly, is a huge advantage for a municipality that needs to take care of the water that people are consuming. If they spot a problem, they can take action right away.”

Duguay, a native of Sussex, is happy to put his microbiology know-how to work in his home province. The company, headquartered on King Street in downtown Fredericton, has customers spanning this continent and others. “We’re excited about the opportunity to be back home,” he says. “The opportunities to talk about science in New Brunswick are few and far between. It’s nice to be able to talk about that now.”

Science and research columnist, and copy editor at Brunswick News. 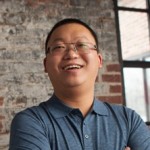 Chen came to Canada to further his studies after part one of his marketing career. One MBA later, and Chen – an ENTJ – is our go-to-guy for driving engagement though digital marketing. He is an avid dog lover, nature lover, and has a penchant for electronic dance music.

It’s been more than 160 years since someone first figured out that germs in drinking water could lead to the spread of disease. In 1854, British doctor John Snow plotted cases of cholera on a map of London and determined that a neighbourhood water pump was the source of an epidemic in the city…. Read More

It was brought to our attention that a job offer for a Collection Specialist with LuminUltra Technologies has been emailed to a group of random recipients. We believe this to be a fraudulent company, sending the email from various names and domains. LuminUltra Technologies would like to clarify that no such opportunity exists, and… Read More

If you are using heterotrophic plate counts (HPCs) to identify nitrifying bacteria – you won’t find them. As it mentions in the name, HPCs only measure heterotrophic bacteria. These organisms feed off organic carbon compounds like fats, carbohydrates, and proteins while autotrophic bacteria produce their own food from basic energy sources like sunlight or… Read More